I absolutely loved MotorStorm. It's a solid off-road racer set in what appears to be a post-apocalyptic world where these races are like the new gladiator combat. If you win, great, if you loose, it probably means that you are a spot at the bottom of a cliff. 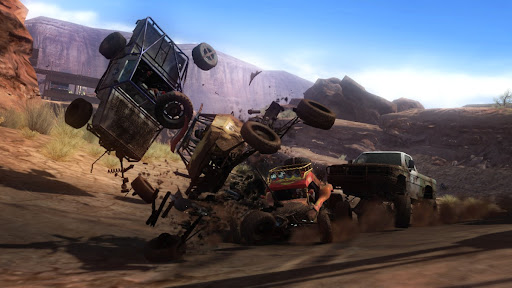 The original MotorStorm in all it's chaotic glory!

I loved the setting, the crazy tracks that no one in their right mind would really run on, and the no rules racing. If you could find a path through the race, that didn't kill you, then you could use it. No rules, no questions. Every track had multiple paths, you had a huge array of vehicle type from motorbikes, to big rigs. It was just good fun. The game sold pretty well too. According to VGChartz, MotorStorm has sold almost 3.5 million copies worldwide. Not too shabby. Obviously, it that would mean it's going to get a sequel, and it did: MotorStorm: Pacific Rift.

MotorStorm: Pacific Rift took everything in MotorStorm and turned it up to eleven. Everything has been tweak, fixed, and done right, a new vehicle class has been added, and there's way more variety in the environments. The physics have been tweaked so that the cars (in my opinion) feel more "real". I'm not sure what they did, but vehicles just seem to feel a little less floaty and a bit more meaty in Pacific Rift. They've also added more variety to the Festival (Single-player mode) so it's not just racing over and over and they added the much desired split-screen racing.

The crazy action of Pacific Rift

Anyway, the game has improved all around. And I'm loving it.

But I found out that the game has been discontinued. That's right, they aren't making any more copies (at least according to the sales clerks at Fry's and GameStop). MotorStorm is in Greatest Hits mode and it's successor has been put out to pasture. I checked the sales on it it's only moved 770K copies worldwide, domestically it was only 220K! How did that happen? It's a solid title and got good (Metacritic rating of 82) reviews but for some reason it flopped at retail. Unfortunately, it released right alongside the news of economic crisis, so my guess is it got hammered due to that, as well as a lot of other really good titles that released around that time. 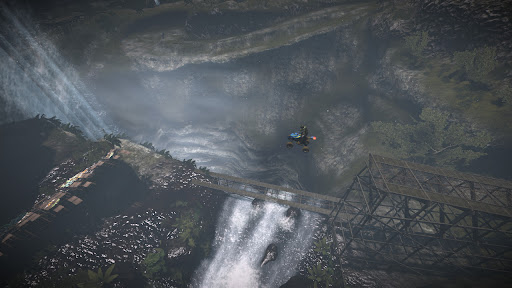 I guess I'm as much at fault as anyone as it's taken me a whole year to finally pick it up. Course it doesn't help that even a year later, with really crappy sales, you'll still see it sitting retail shelves at $59.99 (though I didn't pay that much).

It's a shame, because it's a great game. Hopefully Pacific Rift won't be the last MotorStorm title that we see on the PS3. Arctic Edge recently released on for the PSP so Sony hasn't totally forsaken the series yet. I guess I'll need to pick that up or I won't be able to complain if they drop it.

I'm still waiting for the price to drop though.
Posted by DuncanR2N at 11:38 AM