The world’s greatest detective takes on some of his most dangerous foes while trapped in Gotham’s infamous Arkham Asylum. 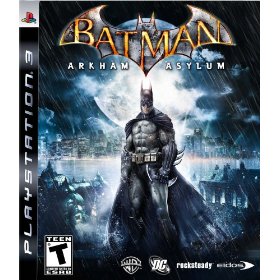 
After capturing and returning the Joker to Arkham Asylum, Batman realizes that he’s played right into his arch nemesis' hands. Trapped, Batman must use his wits and brawn to foil Joker’s plans and unravel the various mysteries of the island.

Gameplay
True to Batman’s character, the gameplay consists of using stealth and gadgets both to outwit and intimidate his enemies. Most important of the tech is a hybrid of night and x-ray vision. This detective mode is used to see enemies’ locations, their danger level, their mental status, and environmental clues. Some of the clues lead to alternate paths while others lead to items hidden by the Riddler. At first, combat may seem simple with an attack, a counter, and a stun button but once you add in various items and evade you have a system that can be quite complex. With proper timing I've been able to string together 30+ hit combos. Effective combat and solving of riddles have an rpg aspect to them as you earn experience to unlock and upgrade attacks, armor, and gadgets.

Graphics
Being an Unreal engine game, the visuals are detailed, dark, and gritty. In fact, in some places the visuals were a little too dark leading me to rely heavily on detective mode. This was a little frustrating in that I was sacrificing the detail in the environments just so that I would be able to clearly see any hidden passages.

Sound
The sound in Batman: Arkham Asylum, specifically, the voice acting, is by far the best I’ve heard in a game this year. Kevin Conroy and Mark Hamill are excellent in their roles. Hamill’s menacing and playful tone as the Joker completely steals the show and gives me a jones to watch Batman: The Animated Series.

Value
While I can’t imagine playing through the story mode more than a couple of times, there are several challenge rooms to complete. These rooms are a sort of one man horde mode where you have to square off with waves of thugs. Some of the challenges involve you serving up a healthy dose of act right, while others are geared to taking down enemies undetected.

The Bottom Line
This is the best game I’ve ever played based on a superhero. The quality of the story and voice acting are the best of any previous Batman offerings. If you are fan of the Bat or just the comic book genre, you owe it to yourself to play this game.
Posted by PanzerNinja at 5:28 PM